What is Microbiome Taxonomic Profiling (MTP)?

One of the major goals of microbiome analyses is to obtain the taxonomic profile of a sample. The most widely used and cost-effective method is to sequence PCR amplicons of a phylogenetic marker gene. For Bacteria and Archaea, the 16S rRNA gene is generally chosen, whereas the ITS gene is used for fungal taxonomic profiling. In EzBioCloud, 16S-based Microbiome Taxonomic Profiling is a cloud app that allows users to generate taxonomic profiles from NGS data and easily group and compare the profiles from different samples.

How does this profiling work?

The below is the general procedure of EzBioCloud’s 16S-based MTP app: 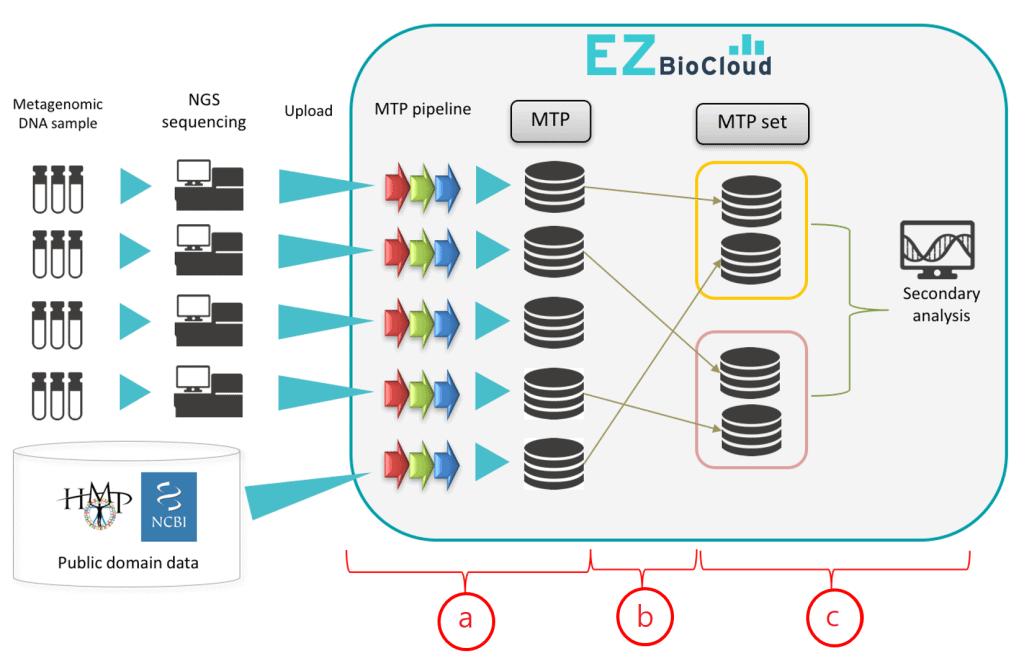 Make sure that you upload 16S amplicon data generated for Bacteria and Archaea.

Here are some primer sets that are most widely used for microbiome analysis:

The primary objective of analyzing 16S amplicon sequencing data is to profile sequencing reads into a known taxonomic structure. The figure below illustrates the current bioinformatics pipeline used in the EzBioCloud 16S-based MTP app.

Raw data that is uploaded to the pipeline can be any one of the following: 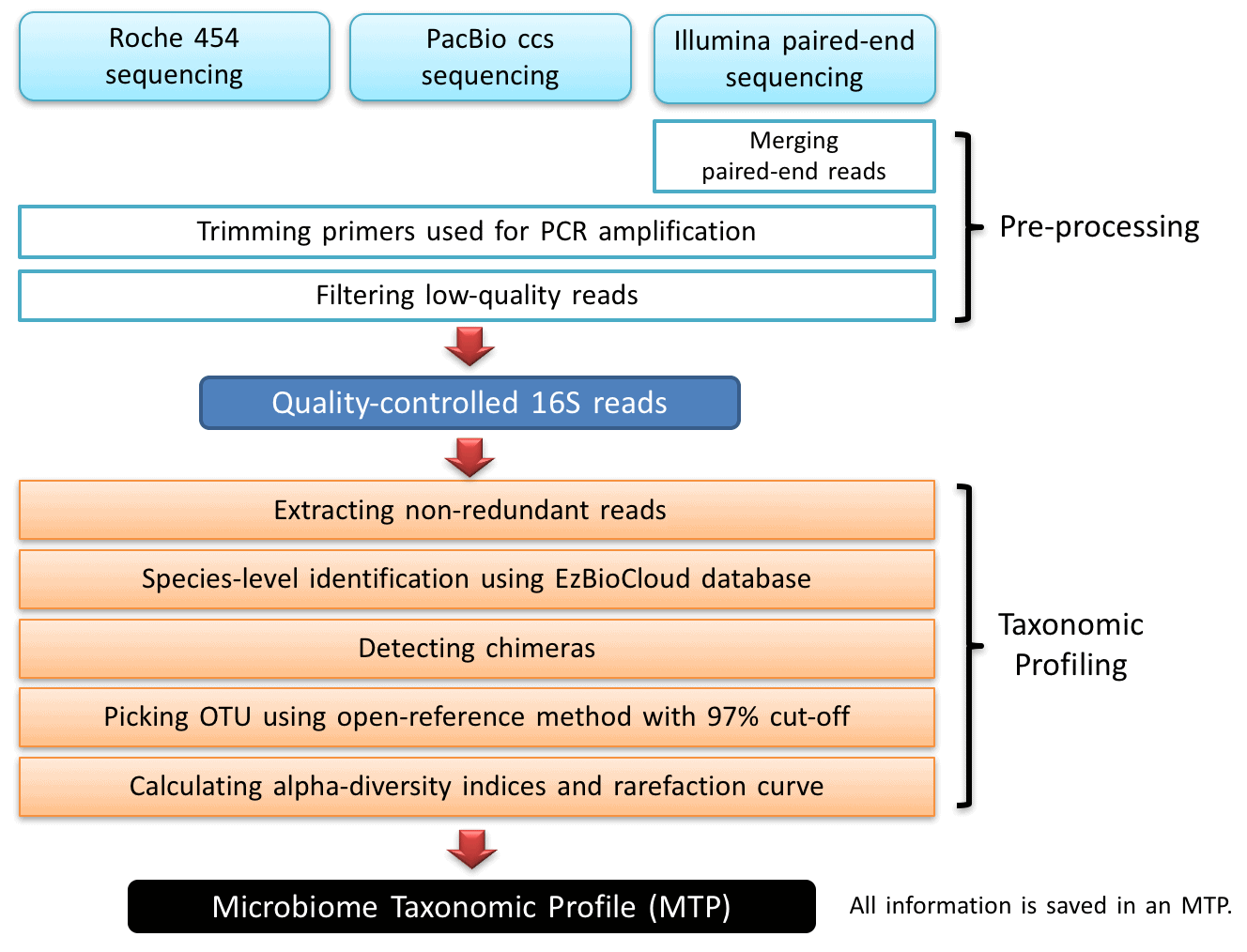 For 16S microbiome taxonomic profiling, the following criteria are used to filter out sequencing reads with low quality:

What is the chimera?

According to Greek mythology, the Chimera is a monstrous fire-breathing hybrid creature of Lycia in Asia Minor, composed of parts from more than one animal. Here, we define the chimera as an artifactual PCR product/amplicon generated erroneously from more than one DNA template. It is a well-known fact that chimeras are inevitable when preparing amplicon sequencing libraries for NGS. It is therefore important to detect and filter them out before any types of microbiome analyses.

PCR involves multiple cycles of (i) denaturation of DNA templates by heat to generate the single-stranded DNA templates, (ii) annealing of the primers to each of the DNA templates and (iii) extension/elongation by DNA polymerase. The major cause of the chimera formation is an aborted extension product from an earlier cycle of PCR which can act as a primer in a subsequent PCR cycle. If this aborted extension product anneals to and primes DNA synthesis from an incomplete template, a chimeric PCR product is formed (see the below figure).

The ratio of chimeras in PCR reactions varies depending on the DNA polymerase used, PCR conditions, and the product size and diversity of the DNA templates. Hass et al. (2011) reported that 15~20% chimeras were detected for 454 sequencing of 16S.

How to detect the chimeras

There are two major approaches to detecting chimeras in NGS-based amplicon data.

(1) Reference-dependent detection: As shown in the above example, each end of the PCR product matches to the strains A and B, respectively. However, as a whole sequence, it would not match to either strain A or B with high similarity. If we know the exact sequences of strains A and B, and there are substantial differences between two, we should be able to figure out that this chimeric product did not come from a single strain but from both strains. Using this principle, a large number of NGS reads can be screened for chimeras using a well established trusted, non-chimeric reference database. Needless to say, the quality of the reference chimera-free database is the key to success in this case. UCHIME and ChimeraSlayer provide this algorithm.

Because there is a huge amount of full-length 16S sequences available, reference-dependent detection has been mostly used in recent studies, particularly for the human microbiome. UCHIME, as implemented in QIIME and MOTHUR packages, is most widely used and has been cited many times.

The following sequence from a human skin microbiome sample was generated by a Roche 454 instrument.

This sequence is identified as a chimera by UCHIME algorithm as:

Please note that two parents belong to different phyla (Firmicutes and Actinobacteria). Try this by yourself using EzBioCloud’s [Identify] service at //www.ezbiocloud.net/identify; copy the left and right half of the above sequence and use them to identify the left and right parts of this 454 sequence.

The following figure illustrates the workflow for chimera detection in the EzBioCloud 16S-based MTP pipeline. The query NGS sequence data is the first subject to taxonomic assignment to the EzBioCloud 16S database. If a sequence matches to a reference sequence with >97% similarity, it is assigned to a species, but also not labeled as a chimera,  as the EzBioCloud 16S database is also checked by a rigorous quality control process that includes chimera detection. The remaining query NGS reads are checked by the UCHIME tool. Because of high coverage of our chimera-free reference database in human and mouse microbiomes, we believe that chimeras that escape this process are minimal, particularly for human/mouse microbiome samples.

Here, we will go through how to browse and get the necessary information about a single Microbiome Taxonomic Profile (MTP). We will use example data which was generated using a whole run of Illumina MiSeq 250 bp paired-end sequencing. The sample is from Dr. Jon Jongsik Chun who is the founder and CEO of ChunLab, Inc. This data was analyzed using the  EzBioCloud 16S-based Microbiome Taxonomic Profiling (MTP) app and can be browsed freely, without a login at [Explore a deep-sequenced human fecal sample].

This web-page consists of several tabs each with different aspects of a single MTP sample.

In this section, statistics (min, max, and average) about the lengths of valid reads are given.

Various alpha-diversity indices can be used to explain biodiversity of an MTP:

Also, a rarefaction curve and rank abundance plot are provided.

On this tab, you can do the following:

Let’s explore data to see what species of the genus Faecalibacterium are present in this MTP. Faecalibacterium is one of the most important human gut taxa and is thought to be beneficial, as it produces short chain fatty acids from dietary fibers.

Formally, the genus Faecalibacterium has only one species, Faecalibacterium prausnitzii, with a valid name.  Here, the combination of a taxonomically validated EzBioCloud database and a sensitive taxonomic assignment algorithm allow the elucidation of detailed profiling at the species level. Because many identified phylotypes are represented by whole genome sequences, a further in-depth functional investigation is possible using comparative genomics.

On this tab, taxonomic compositions at various ranks (from phylum to species) are given as pie charts and tables. The charts and tables can be exported or downloaded for immediate use in reports and publications.

In the species composition table, use the <filter> to quickly search for abundances of taxa that you are interested in. For example, entering “Bacteroides” will show you all species that include the term “Bacteroides” (See the below screenshot). Please note that this will not reveal the phylotypes in the genus Bacteroides.

In this tab, you can explore the abundances of any taxa. We also provide several predefined taxa (subject to change):

The abundance of any taxa which are not included in these predefined lists can be found by entering the name of a taxon into [Search taxa].  For example, enter “Escherichia coli group” to get the abundance of this taxonomic group.

Under the “Krona” tab, taxonomic compositional data are loaded onto the Krona tool, which is an open source visualization project available here. This tool is developed by Ondov et al. (2011) and provides an interactive means of exploring the data.  Nice figures can be captured here, for publication or presentation purposes.

It is a quick and easy way of visualizing major taxonomic groups at any ranks (from phyla to species) for a single MTP. The Word Cloud is an image composed of words used in a particular text or subject, in which the size of each word indicates its frequency or importance. The below World Cloud images are of phyla and genera from a human gut microbiome. Obviously, the genus Faecalibacterium belongs to the phylum Firmicutes.