Bacterial identification is the process of assigning an unknown bacterial strain to a known species or subspecies (note that only a few species have subspecies). Species is a basic unit of taxonomy or classification of living organisms, and yet, it is not evident that ‘species’ as a discrete entity exists in the real bacterial world. Nevertheless, we still need the concept of species for practical reasons when classifying and identifying bacteria. Therefore we must also have an acceptable working practice when defining bacterial species. Bacterial identification is a routine process for many clinical and environmental microbiology laboratories,  as well as those in the biotechnology and food processing sectors where quality control is extremely important. In recent years, big advances in bacterial identification have followed big advances in analytical chemistry and molecular biology, particularly, high-throughput DNA sequencing. There are now numerous methods that can be used to identify bacteria, and still, accuracy, turn-around-time (TAT), and cost are major concerns for laboratories that need to do this routinely. The accuracy of bacterial identification methods in particular, or rather inaccuracy, can lead to costly mistakes in industrial problem solving, and more importantly, costly mistakes in medical diagnoses and treatment.

All methods for bacterial identification fall into two categories:

The bacterial species concept is now based on a direct comparison of genome sequences, so a species concept-based identification scheme can similarly be built using genome sequence data. This process involves two steps: (1) selection of phylogenetically close species using a fast search engine and (2) calculation of average nucleotide identity (ANI) to the chosen species. The generally accepted ANI cutoff for species boundary is 95~96 %.  These general standards and procedures for taxonomic purposes have been proposed and should give a good overview of the species concept-based identification scheme. [Chun et al., 2018]. 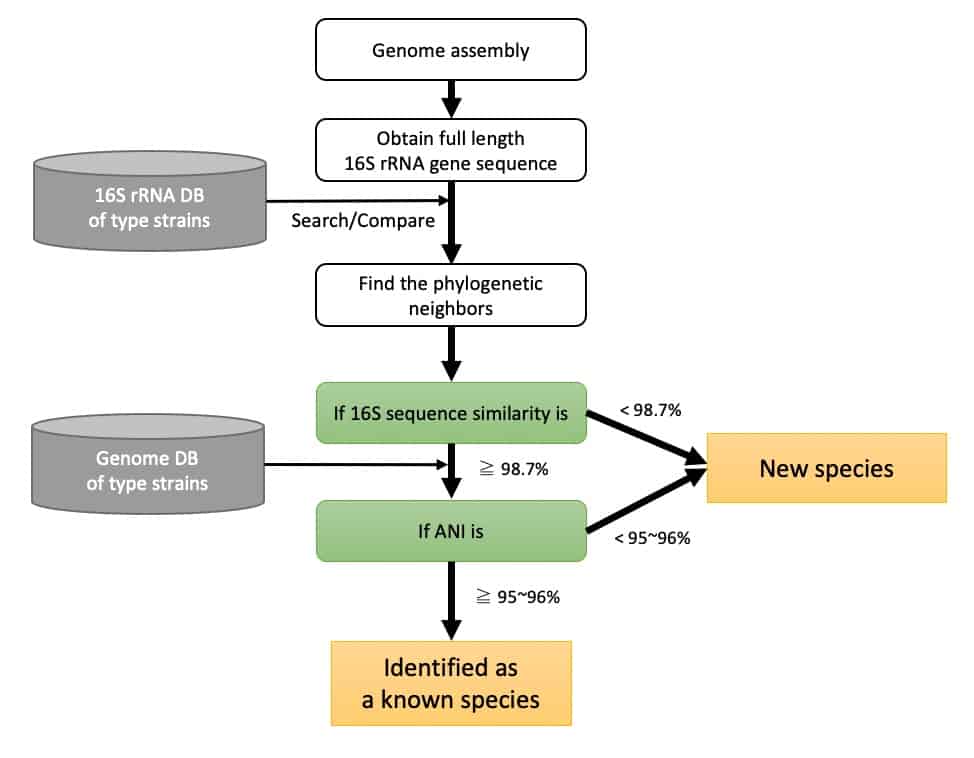 The TrueBac TM ID system is ChunLab’s cloud service for bacterial identification using whole genome sequences. It is designed to give you the true identity of bacterial isolates.

How does TrueBac ID differ from other bacterial identification systems?

The science behind genome-based bacterial identification is simple. Two conditions are required:

For requirement (a), a genome sequence database of type strains should be established. Such a database should contain quality-assured genome sequences that are taxonomically correct.  Also, ideally, it should cover most, if not all, species.

The scientific background of (b) is well established; if the average nucleotide identity (ANI) value between the type strain of a known species and an isolate is ≥ 95~96%, the latter is identified as a strain of the former species [Learn more].

At present, TrueBac DB contains over qualified whole genome data for 9,400 species/sub-species, which have been subject to stringent quality-control, and manually curated and taxonomically validated (taxonomic authenticity was checked).  TrueBac TM ID-Genome is the only identification system that can provide the identification for over 9,400 bacterial species with almost perfect accuracy.

The most critical measurement for 16S-based species identification is pairwise sequence similarity. However, different sequence alignment algorithms may produce different similarity values. Therefore, it is important to use a taxonomically valid algorithm for alignment and similarity calculation. It is ideal if we calculate all similarities between the isolate and all type strains of the known species. This is doable, but not efficient as it will take very long for computing all pairs (>70,000) while we only need the values that are close enough (i.e., species with >97% similarity). For this reason, a two-step approach is devised for the TrueBac ID-16S service. It is the same as the one used on our public [Identify] service (www.ezbiocloud.net), except that the reference database used in TrueBac ID-16S is more stringently curated. [Learn more].

TrueBac ID-16S algorithm (the above figure) performs the following steps:

Interpretation of 16S similarity values should be carefully done. For example, Bacillus cereus shows >99.8% 16S similarity to about ten species [Learn more], implying that very similar 16S sequence does not always mean that the isolate belongs to the hit species.

If  strain 1 belongs to species A, the necessary conditions are:

Ideally, ANI values are calculated for the genome sequence of the isolate against the genome of type strains of all known species. This would require an enormous computing resource  and is not efficient as we are only interested in the species identification. In other words, only closely related species would matter. For this reason, TrueBac ID-Genome adopted a two-step approach where, first, the potential hit species are identified using four-way searches which are then used to compute ANI values with the query genome. Sometimes, a good-quality sequence cannot be extracted from the final genome assembly. Therefore, in addition to the 16S gene, the recA and rplC genes are used for searching the potential neighboring species. The RplC is a ribosomal protein whereas RecA is not. They are members of the recently revised bacterial core gene set [Learn more].

The TrueBac ID-Genome algorithm (figure above) performs the following steps:

Please note that the TrueBac DB contains >2,000 genomospecies [Learn more]. If your query genome is identified as one of these, it means that you have a novel species. Genomospecies are included in the database and are being expanded constantly to provide users the way of tracking isolates belonging to novel species. For example, CP015110 (a genome sequence deposited in NCBI) represents a novel species in the genus Acinetobacter so it was named the genomospecies CP015110_s in TrueBac DB. If a user isolates multiple strains belonging to this species, they will be identified as “CP015110_s” instead of “Acinetobacter sp. nov.” by TrueBac ID-Genome service. In this way, most, if not all, isolates can be properly classified and organized easily according to the species.

How to identify a bacterium using TrueBac TM ID

Bacterial taxonomy now fully embraces genomics. Bacterial species can now be objectively and precisely defined using a comparison of whole genome sequences. Bacterial identification at the species level can, in theory, be always accurate if genome sequences are used. In fact, it has been shown that the substantial portion of clinical isolates are either misidentified or belong to hitherto undescribed/unrecognized species, named genomospecies when genome sequencing is used for the identification at the species level(Roach et al., 2015). In routine microbiology laboratories where bacterial identification is carried out on a regular basis, the scheme described in the proposed minimal standard for bacterial taxonomy (Chun et al. 2018) can be applied to ensure accurate identification using a combination of 16S rRNA gene (16S) and whole genome sequences.

16S and whole genome sequences for use in bacterial identification

The use of 16S and whole genome sequences for the purpose of bacterial identification has its pros and cons:

Both 16S and whole genome sequencing are valuable tools in routine microbiology laboratories. In most cases, the genome sequence contains at least one 16S sequence, so specific 16S amplicon sequencing is not necessary. Here are three possible scenarios for routine bacterial identification by sequencing:

Bacterial isolates are subjected to whole genome sequencing using one of available NGS platforms. Assemble raw data to generate contigs and upload the resulting genome assembly to EzBioCloud’s TrueBac ID-Genome for the definitive identification. TrueBac ID-Genome also provides the search result of the 16S sequence included in the genome assembly. If your isolate exhibits the average nucleotide identity (ANI) value of ≥95% to a known species, it is considered successfully identified. Otherwise, it is likely a member of a hitherto unknown novel species. Finding a novel species in either environmental or clinical laboratories is not a rare event.

The 16S sequence is determined from an isolate using a Sanger sequencing instrument (e.g., ABI 3700). The final 16S sequence should be edited manually to ensure the highest quality possible. Upload the sequence into EzBioCloud’s TrueBac ID-16S service. If 16S of the isolate shows <98.7% sequence similarity to all known species, your isolate likely belongs to a novel species. However, the opposite is not always true. Many closely related species show 16S similarity of ≥98.7%, even identical 16S sequences in some cases. If you want to achieve an accurate and definitive identification at the species level, you should use whole genome sequencing instead of 16S sequencing.

To reduce cost (but not time), 16S amplicon sequencing can be performed first to see if the isolate belongs to a novel species.  Otherwise, the whole genome is then sequenced. This strategy was proposed by Chun et al. (2018). However, this sequential approach does require extra time.

TrueBac ID service can be provided as a subscription or using vouchers. The below video tutorial will show you how to use a voucher to carry out an identification using TrueBac ID-Genome. To get a voucher or for a free trial, please contact info@chunlab.com.

For a test drive, please contact us at info@chunlab.com.

TrueBac ID has been designed to definitively identify bacteria using whole genome sequence data. Here we have run TrueBac ID on some publicly available data to highlight the accuracy of the system. Because taxonomy and the TrueBac Reference Database are constantly being updated, the data presented here are those at the time of analysis.

Input dataset contains 99,078 bacterial genomes from pure cultures (excluding metagenome and single cell assemblies). Contaminated genomes were also excluded by the ContEst16S tool. All identification results of TrueBac ID are provided at www.ezbiocloud.net. The identification was carried out on May 15, 2018.

A team at the University of Washington Medical Center published the genome data of >1,200 bacterial strains isolated from an Intensive Care Unit for a year (Roach et al., 2015; PLOS Genetics 11:e1005413). TrueBac ID was used to re-analyze the same dataset. The identification was carried out on May 15, 2018.

A team at Harvard University isolated a potential therapeutics strain from human gut. This strain could not be identified by MALDI-TOF or other conventional methods, so it was tentatively proposed as a novel species ‘Clostridium immunis‘ (Nature 2017; 14;552(7684):244-247) . TrueBac ID successfully identified this strain as Clostridium symbiosum by 98.48% Average Nucleotide Identity (ANI).

Further identified as the species level:

The original name of the genome has the correct genus name but does not contain specific epithet. In this example, Sulfitobacter sp. NAS-14.1 (GCA_000152645.1) is identified as Sulfitobacter pontiacus.

Further identified as the subspecies level:

Not identified at the species level: