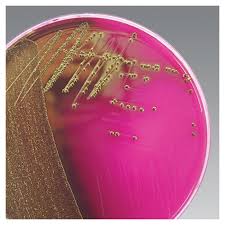 How to obtain the type strains

The type strains of the species with valid names should be available to anyone for comparative analysis (for a reasonable fee). These are maintained as live cultures and can be obtained from various culture collections. A list of culture collections can be found at website of the World Federation of Culture Collections. If you are looking for the type strain of a particular species, the StrainInfo database is a useful source. For example, the information about the type strain of Escherichia coli can be obtained here. In theory, the type strain of any species with a valid name should be available for study. I said “in theory” because there are problems and exceptions in some cases.

How to obtain the genome sequence of a type strain

In modern bacterial taxonomy,  classification and identification are mainly based on the pairwise comparison of genome sequences between the type strain and a strain under consideration. It is therefore of premium importance that the genome sequences of type strains are available for comparison. As for other nucleotide sequences, these data are deposited in the primary DNA sequence databases, i.e., NCBI, EMBL-EBI, and DDJB. There are now many genome sequences of the type strains, but one should be cautious before using these for any study.  One must remember that the responsibility for authentication and validation of genome sequence data in these primary public databases, falls on the original depositors to the database, and not on the database curators. There are many cases where wrong data is labeled as those of the type strains.  If these are used for classification and identification, then the results are fundamentally incorrect. 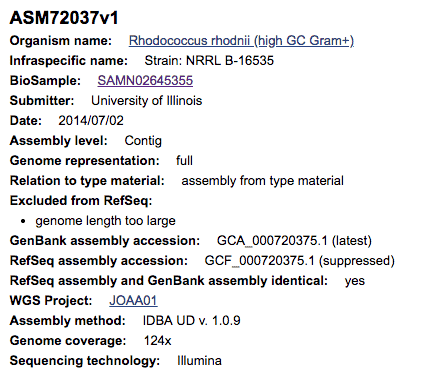 For example, the genome sequence of Rhodococcus rhodnii NRRL B-16535 with the NCBI accession GCF_000720375.1 (see the screenshot above),  is labeled as that of the type strain. The strain designation NRRL B-16535 indicates that it is a type strain [Learn more]. After careful taxonomic investigation and curation, it becomes clear that this genome is not of the type strain of Rhodococcus rhodnii, but rather belongs to the genus Kibdelosporangium [Learn more]. Due to the lack of genome data for the type strains of Kibdelosporangium spp., we can identify this genome only up to the genus level (at the time of this writing).

If you have quality-controlled genome sequences of correct type strains of all known species, the identification of any bacterial isolate should be straightforward, in theory, with 100% accuracy.

In the EzBioCloud public database and TrueBac TM database, both of the terms, type strain and reference strain, are used.

How to find public microbiome data based on 16S rRNA gene

Majority of microbiome taxonomic profile data are based on 16S rRNA gene targetting bacteria. In this document, I will explain how to search and locate

Installation of EzEditor2 and related programs EzEditor2 is a JAVA program and requires other external programs to run together. Install the followings before running EzEditor2 program.