The best way to create an MTP set (a group of microbiome samples) is to use metadata tags (shortly tags). A tag is a short word that represents a single feature of a sample. An MTP (sample) can be explained as a series of tags. For example, a sample from a 70-year-old, male, non-smoking US citizen who is an obese patient can be labeled by the following tags: [US] [senior] [male][non_smoking][obesity]. Please note that a tag does not contain a blank space character which should be replaced by an underscore (_).

You must create tags before you can apply them to your MTPs. You can do this by opening .

Attaching the metadata tags to MTPs

After you create tags, it is now time to attach the tag(s) to each MTPs. 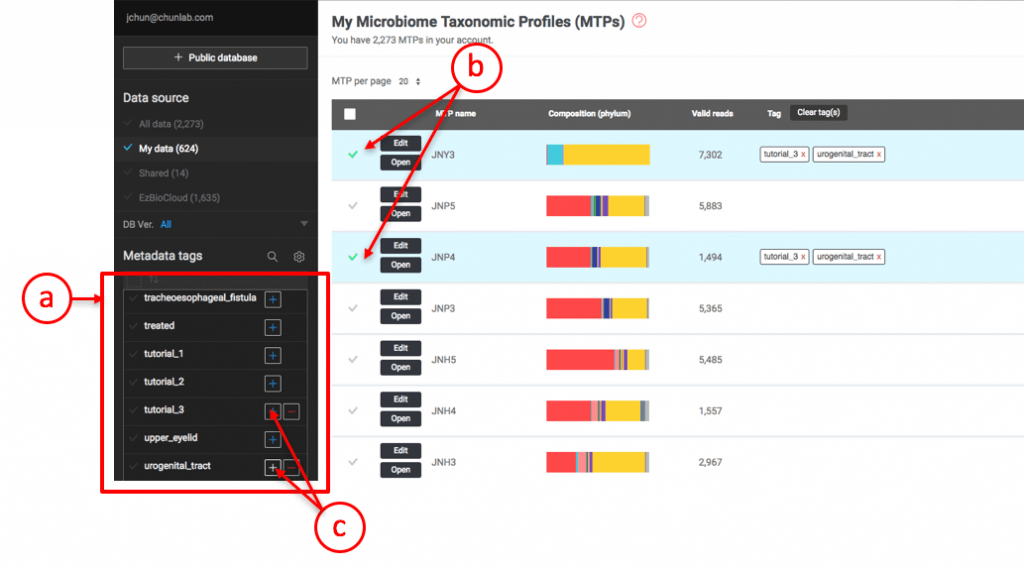 You can name an MTP set as you wish. Just remember that the set names will be used in many visualizations such as charts and scattergrams, so concise and informative names are highly recommended.

An MTP set consists of two or more MTPs, representing a group of microbiome samples. Once an MTP set is created, it can be browsed by the . Here, we will open a set called “seniors” which contains 68 MTPs with the same and different tags (For example, all MTPs has “senior” tag, but only some are labeled with “Cdiff+”, “antibiotics+” or”antibiotics-“.

There are four menus in the MTP Set Browser.

In this page, the list of MTPs in the set is displayed.

Listing MTPs in an MTP set

In this page, three submenus (tabs) are provided: , , and

The double pie chart is a special, interactive chart that simultaneously displays compositions of two taxonomic ranks in the sample time.

In this page, the composition of a selected taxon can be shown as a box plot. In addition, predefined sets are provided to quickly browse the compositional information.

In this menu, general information and indices explaining alpha-diversity are provided. Basically, alpha-diversity indices are calculated for each MTPs. In this visualization, all of those values are shown side by side for you to quickly compare. 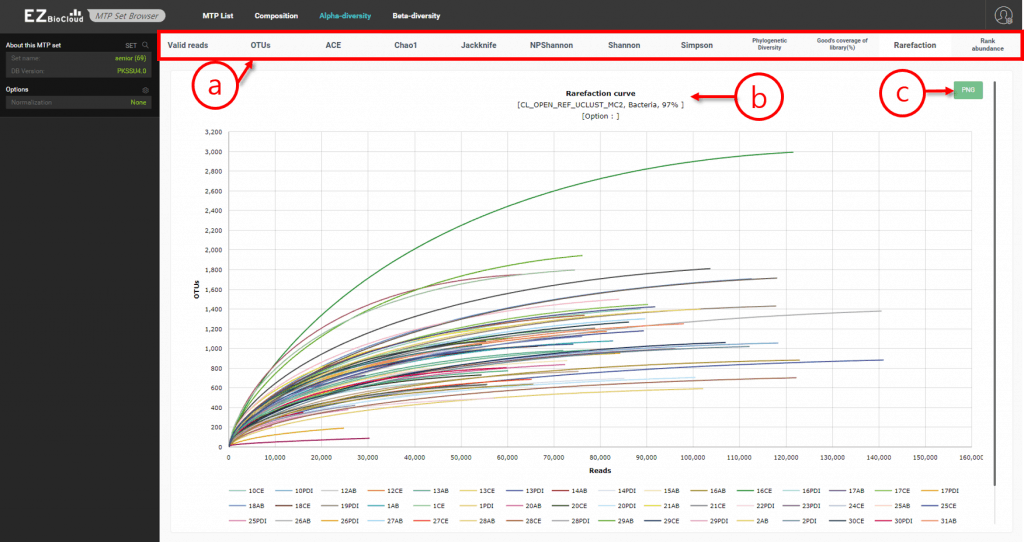 Alpha-diversity indices of an MTP set

Beta-diversity analytics allows us to understand the relationship of microbial communities stored in multiple MTPs. At present, these are presented as either ordination analysis or hierarchical clustering. The first step for the beta-diversity is to calculate the distances among the set of MTPs. In the ordination analysis, the data reduction of the distance matrix is performed by the principal coordinate analysis (PCoA) to give the major axes of principal components (PCs). In EzBioCloud 16S-based MTP app, we take either the first two or three PCs to draw the scattergrams. The same distance matrix can be used to carry out the hierarchical clustering using UPMGA algorithm (Unweighted Pair Group Method with Arithmetic Mean). There are several different algorithms to calculate beta-diversity distances and pertaining parameters. EzBioCloud 16S-based MTP app allows instant and interactive navigation of data space using optimized user interface. 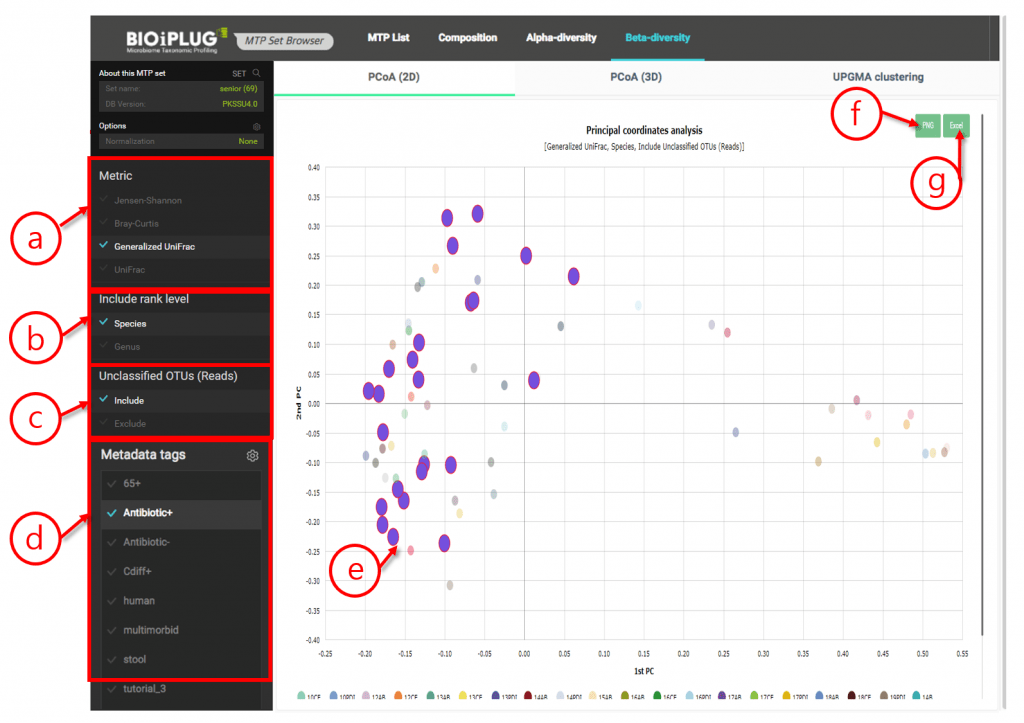 This is the same scattergram as the above 2D one, except that it takes an additional, first principle component axis. 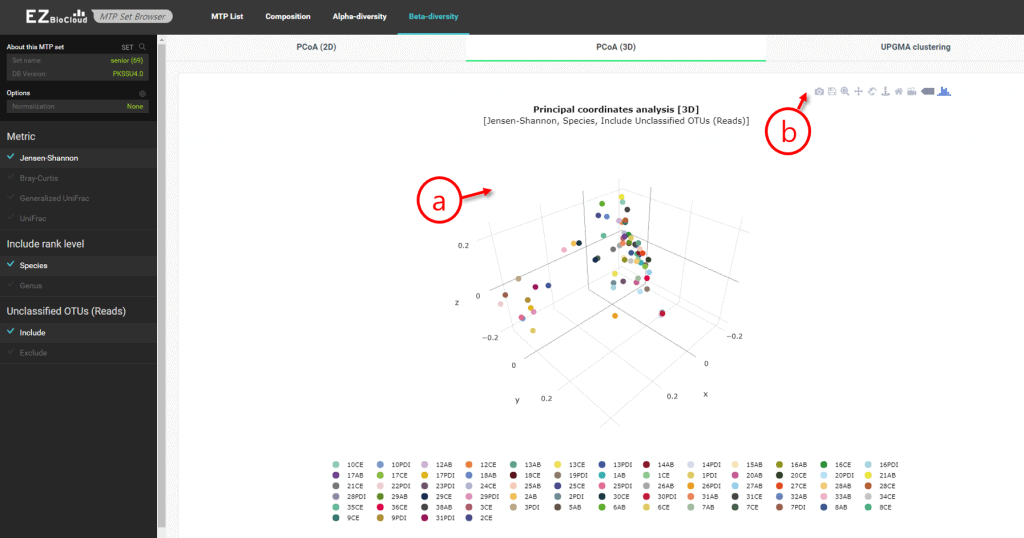 Unlike ordination diagrams, hierarchical clustering forces each MTPs (samples) to be grouped in a strictly hierarchical way. Again, you can change the distance algorithms and associated parameters. The chart should be called a dendrogram, not a phylogenetic tree. 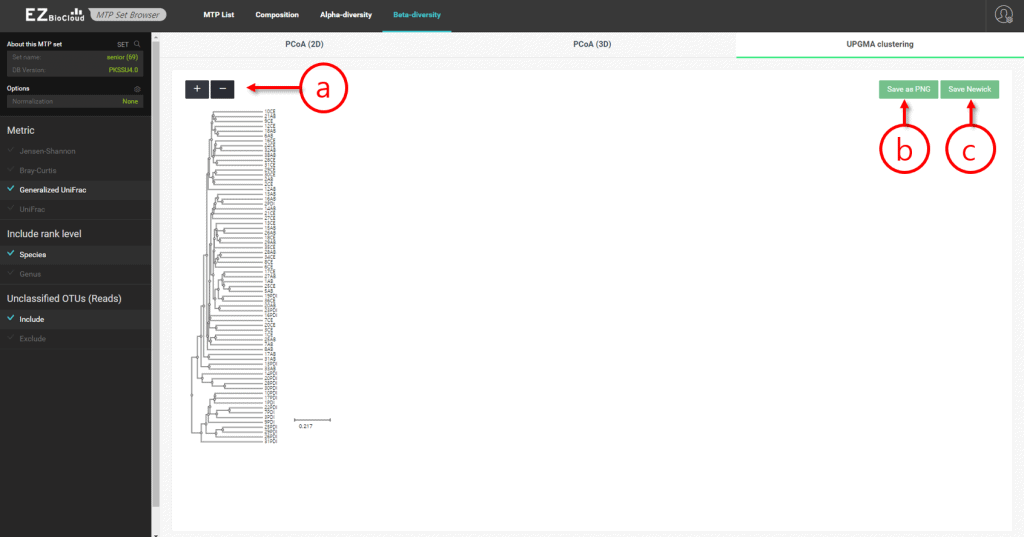 A dendrogram resulted from a UPMGA clustering

Microbiome samples, MTPs, are grouped into the sets and compared to find differentially present taxa. EzBioCloud 16S-based MTP app provides several ways of visualization and statistical analyses, under the menu <Comparative MTP Analyzer>. To use this functionality, you must create at least two sets of MTPs in advance [Learn more].

The function can be accessed from the

You can compare up-to five MTP sets depending on your subscription model [Learn more]. 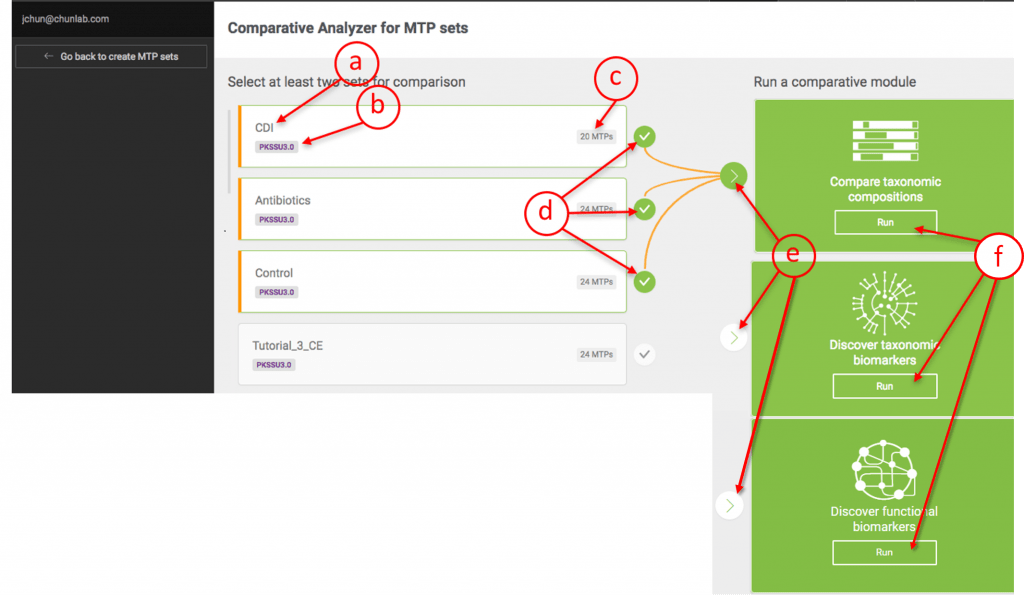 The order of the “set selection” is important as the sets will be displayed in that order for all subsequent visualization and analyses. 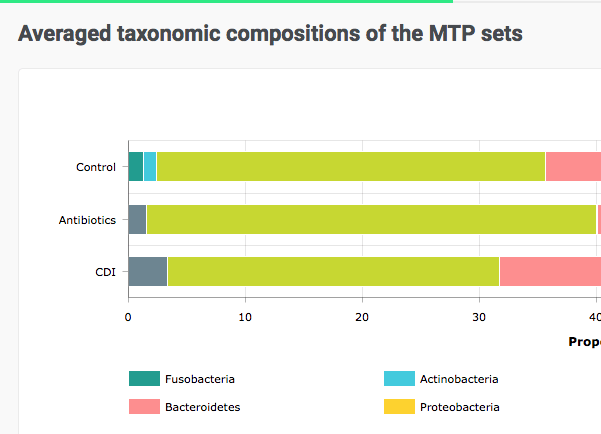 “Firmicutes” phylum was selected and highlighted.

In this module, the composition of the selected taxa can be shown as box plots [Learn more]. In addition, predefined sets are provided to quickly browse their compositional information.

You can also analyze using a taxon of your choice.

In this module, various alpha-diversity measures are compared among multiple MTP sets.

Species richness is the number of different species/OTUs represented in an MTP/microbiome sample. Species richness values among MTP sets are compared and statistically tested to see if they are different. 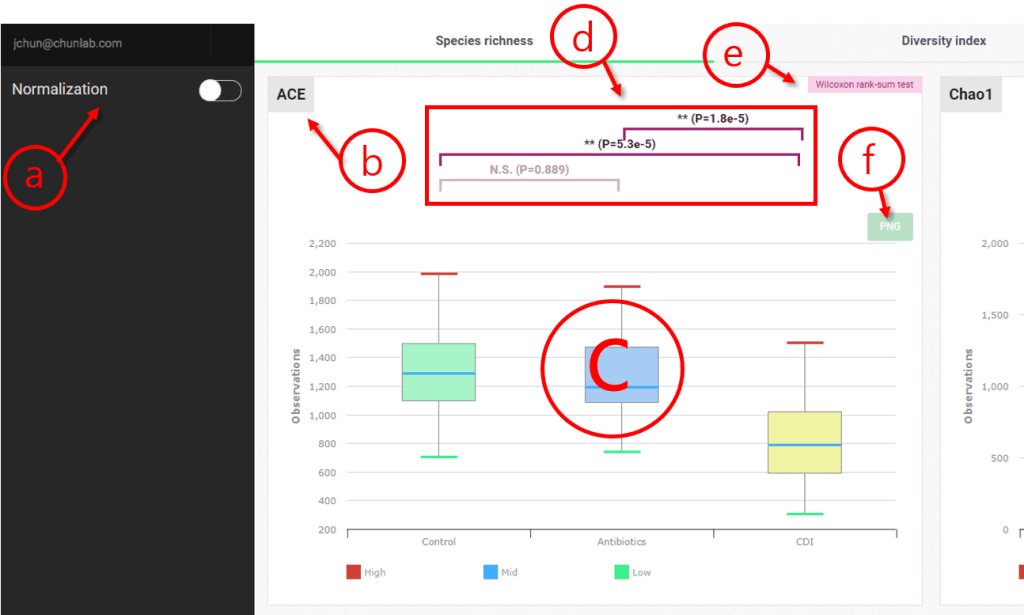 In this module, beta-diversity or relationship among MTPs are visualized and statistically evaluated. All calculations are based on a distance between two MTPs (microbial communities), for which several algorithms are available in EzBioCloud 16S-based MTP app.

Using beta set-significance analysis, you can test if there is a significant difference between MTP sets using distance measures of beta diversity. The results are displayed in two sections. To change the types and parameters of beta diversity distance measures for this analysis, click the desired options on the left panel. The pages will be refreshed with new results instantly.

Permutational multivariate analysis of variance (PERMANOVA), a non-parametric multivariate statistical test, is used to test the null hypothesis that the centroids and dispersion of the MTP sets as defined by measured space, are equivalent for all sets. A rejection of the null hypothesis means that either the centroid and/or the spread of the MTPs is different between the MTP sets.

PERMANOVA test is first performed with all MTP sets, then for each pair of MTP sets.

It is equivalent to the “beta-group-significance” command in the QIIME2 package.

There are three methods for biomarker discovery. is the default method. is simple calculation of OTU presence/absence between(among) the sets. is more rigorous method than . 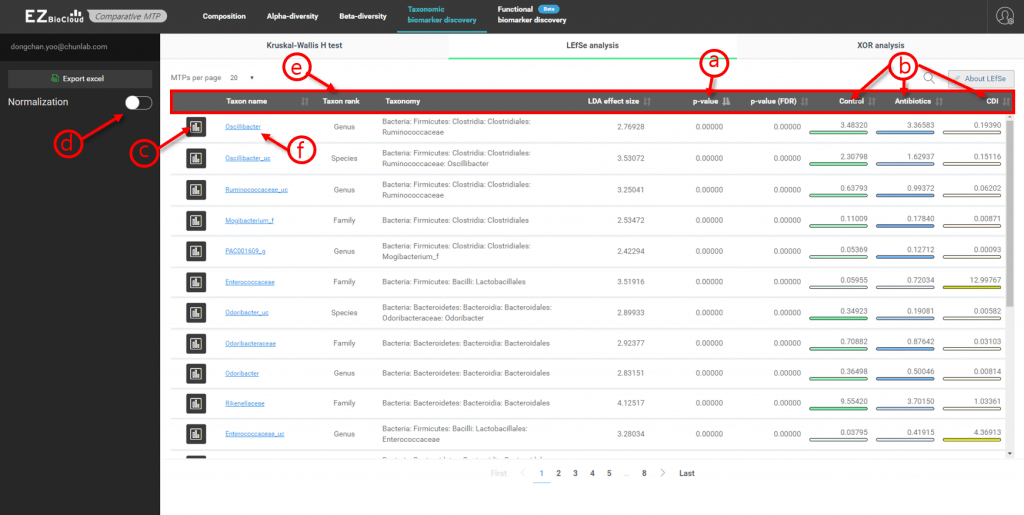