A microbiota is the entire collection of microorganisms in a specific niche, such as the human gut or soil. The microbiome is comprised of all of the genetic material within a microbiota. The most important methodology for studying microbiomes is metagenomics which involves the massive sequencing of DNA followed by sophisticated bioinformatics.

The goals of microbiome research are to understand (i) who are the inhabitants (ii) what they do and (iii) how they do it. 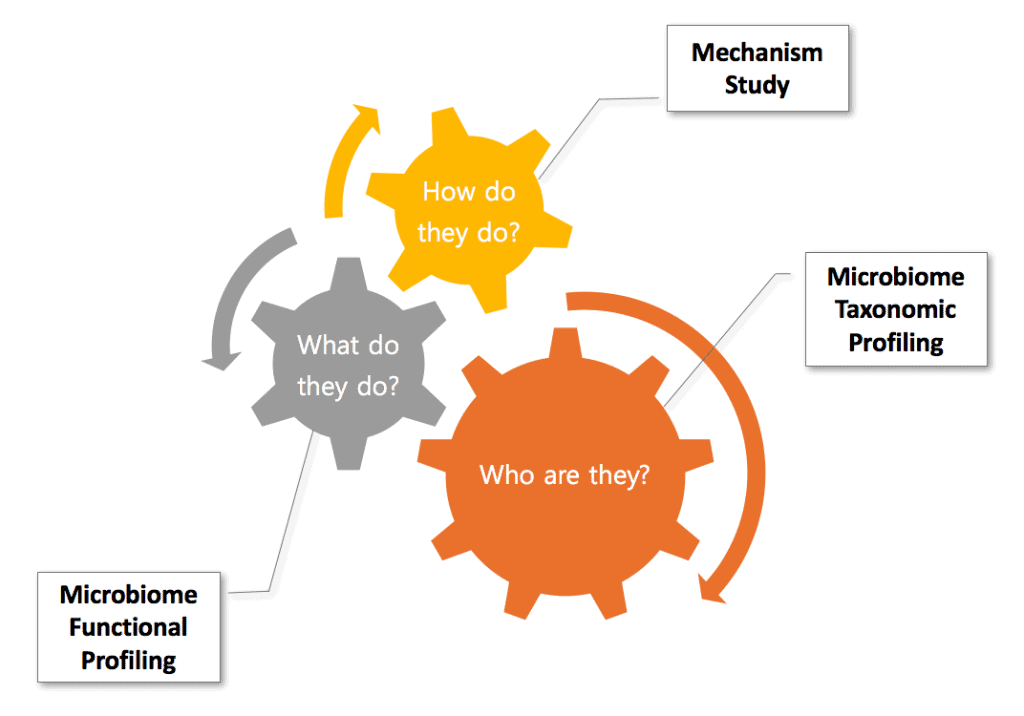 Goals of the microbiome study

To achieve these goals, we need to get the taxonomic and functional profiles of microbiome samples, then  group and compare them to understand differences. For example, we could identify bacterial species responsible for causing obesity by comparing taxonomic profiles between the groups of healthy and obese subjects. High throughput DNA sequencing provides an accurate and efficient way to obtain these profiles.

The above figure summarizes the major steps in microbiome studies. The process of bioinformatics can be divided into two steps: primary and secondary analyses.

In this step, NGS reads in large volume are turned into light-weight profiles. For example, if 100,000 16S NGS reads match to the sequence of Vibrio cholerae type strain, the final profile will only store only the count information, i.e., 100,000, of V. cholerae, not the raw sequence data. Similarly, NGS sequences matched to a certain functional ortholog group, e.g., K00076 involved in secondary bile acids biosynthesis, will be stored in the functional profile with only the count information. A series of software tools, called a pipeline, is used to process raw NGS data in order to generate taxonomic or functional profiles. 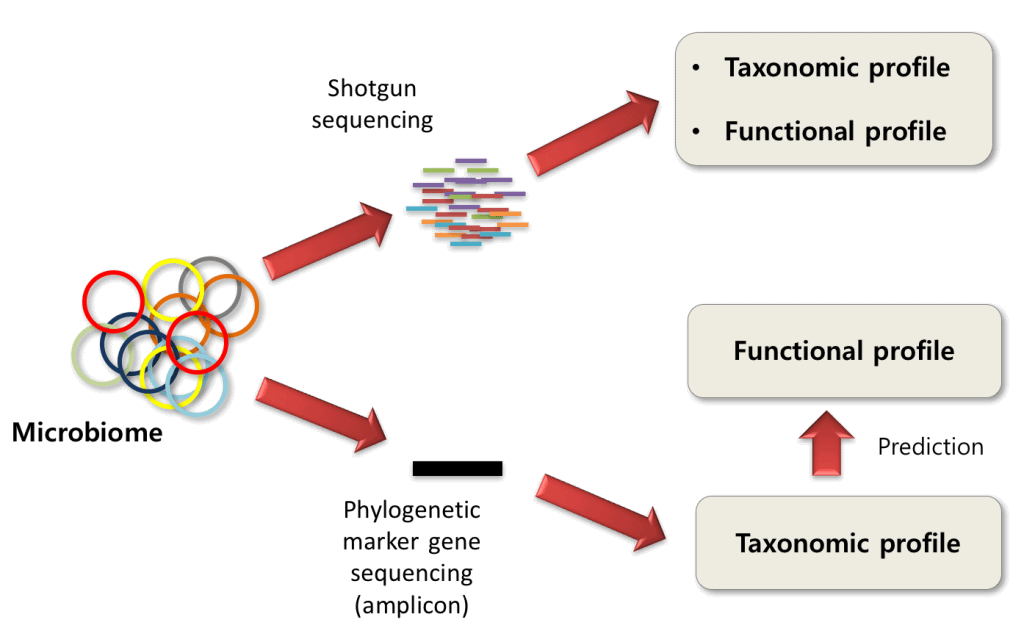 The most popular method of generating microbiome profiles is by sequencing amplicons of phylogenetic markers. 16S and ITS are the choice of markers genes for Bacteria and fungi, respectively. It is both cheap and sufficient to capture the taxonomic structure of microbiome samples. The drawback is that only taxonomic profiles can be obtained. To obtain functional profiles, shotgun sequencing should be used. There is a way of predicting functional profiles from taxonomic profiles (See Langille et al., 2013), but the accuracy cannot be guaranteed. The following table illustrates the pros and cons of amplicon and shotgun metagenomics.

Once taxonomic or functional profiles of microbiome samples have been generated, using a pipeline and reference databases, they can then be compared to see differentially present taxa or functional units.  Functional units may be orthologous groups or pathways, called biomarkers. We call it secondary analysis as the sets of profiles can easily be swapped or changed out for a new analysis. Because profiles are light-weight, most secondary analyses can be run instantly or within a reasonably short time (e.g. <20 sec).

A web-based secondary analysis platform is a powerful tool, as it enables an instant and interactive process for biomarker discovery. EzBioCloud 16S-based MTP app is designed to provide an optimized means of secondary analysis with versatile visualizations and publication-ready reports.

Understanding terminology and the basic concepts and practices of bacterial taxonomy is a prerequisite for proper microbiome analysis. Here, we will outline the most important of these concepts, terms and practices pertaining to microbiome bioinformatics. Here we will also be referring to “Bacteria” but these ideas can be extended to “Archaea” as well, as both use the same principles and are governed by a single formal process.

The basic unit for taxonomic profiling

The basic unit for taxonomic profiling of a microbiome is species. Because the results of metagenomic analysis contain data derived from uncultured (not unculturable), and otherwise complex mixtures of organisms, we must define another term. Operational Taxonomic Unit (OTU), is often used for this purpose. The terms, species and OTU, are often used interchangeably but should be used separately.

The goal of microbiome research is to understand the taxonomic profiles among different samples at the species or lower levels. Because of the limitation of the 16S barcode, getting information about subspecies level is impossible. However, using carefully designed sequencing and bioinformatics, species-level profiling can be achieved. The OTU serves well as a basic unit of taxonomic profiling instead of species when a reference database is not well established.

A single OTU may contain multiple species. Here, for example,  is the case of Bacillus cereus which is a well-known soil bacterial species. If the OTU concept with 97% cutoff is applied, twenty-three species would be collectively be considered as a single OTU as 16S sequence similarities are >98% (see Table below, data generated from //www.ezbiocloud.net/identify using the sequence of B. cereus type strain).

Table. 16S sequence similarities of some Bacillus species against the type strain of Bacillus cereus. Please note that CP013274_s and JH792383_s are genomospecies.

File could not be opened. Check the file's permissions to make sure it's readable by your server.

How are bacterial species defined?

This blog explains the details of how bacterial species is defined [Learn more]. Here, we will outline the essence of currently acknowledged bacterial taxonomy.

Several types of species or similar terms can be defined and used for microbiome analysis.

Except for the species with a valid name, all other cases (species with an invalid name, Candidatus, phylotype) do not have a standing in the formal nomenclature. However, we could assign unique names or identifiers to all naturally existing species, which can greatly improve the taxonomic profiling of a microbiome, especially for large-scale comparisons. Please check the up-to-date statistics on the taxonomic database and diversity at //www.ezbiocloud.net/dashboard.

What is the 16S copy number and why it matters?

The 16S rRNA gene (16S) has been widely used as a phylogenetic marker, particularly important for the taxonomic profiling of microbiome samples. Unlike other genes that code for proteins, the 16S-coding gene may be present in multiple copies in a single cell. Obviously, a bacterial strain must have at least one gene encoding 16S, but the copy number can go up to 15 (see the below chart). There is a positive correlation between the genome size and 16S copy number. 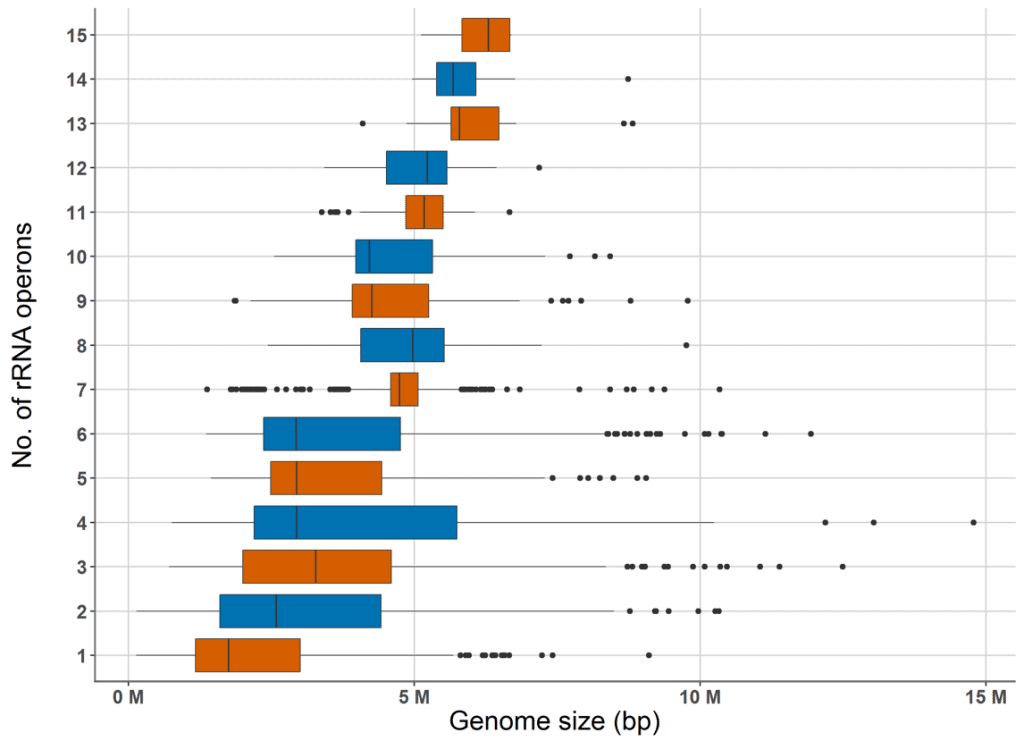 16S copy numbers of bacteria in EzBioCloud database (generated from only complete genomes).

When we analyze microbiome data using 16S amplicon sequences, all quantitative measures are a form of NGS read counts that are assigned to the known taxa. In this case, we actually count the number of a marker gene, typically 16S, present in a microbiome sample. However, what we eventually want to know is not the number of 16S reads but the number of corresponding cells, or CFU (colony forming units).

Let’s assume that we are analyzing a human fecal sample. After sequencing, we obtained 100 reads assigned to Bacteroides fragilis and also 100 to Prevotella copri. Both species are frequently found in the human gut. Should we say that two species are present in equal numbers? According to the EzBioCloud database which provides information about 16S copy number, B. fragilis has 6 copies whereas P. copri contains 4 copies [Learn more for B. fragilis and P. copri]. If we consider this, the corrected ratio between B. fragilis and P. copri should be 3:2, not 1:1. The necessity of 16S copy number correction or normalization has been raised by several studies (Kembel et al., 2012; Angly et al., 2014; Vandeputte, et al. 2017).

The relative taxonomic compositional data of a microbiome sample can be corrected by simple calculation once we know the 16S copy numbers of all species. A problem is that we do not know these values for all species. To obtain accurate data, one or more complete genome sequence is required. Incomplete genome assemblies derived from short NGS reads contain either no or an inaccurate number of 16S gene sequences. At present, there are 3467 species represented by complete genome sequences (As of Dec. 2017). 16S copy numbers of the remaining species, including uncultured phylotypes, should be interpolated using the existing data. 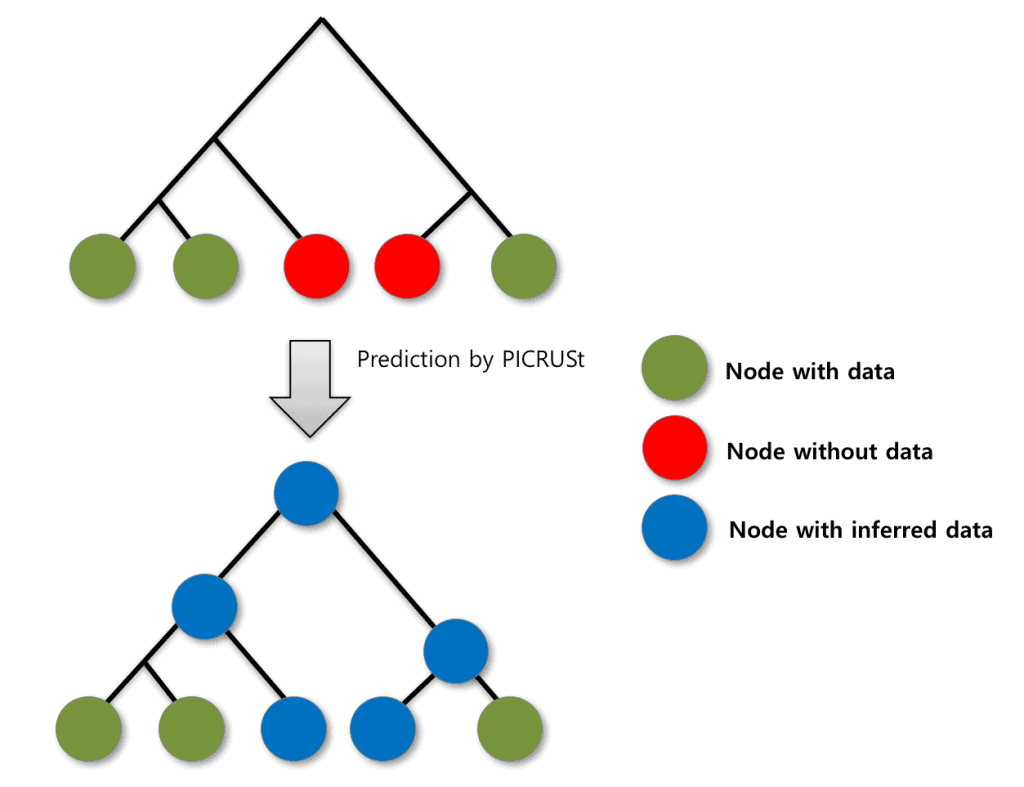 EzBioCloud 16S-based MTP app allows you to instantly and interactively apply 16S copy number correction to the comparative analysis of multiple samples, the calculation of beta-diversity,  and to Biomarker Discovery (e.g., LefSe) as well. Our database of 16S copy number is more comprehensive than any other database as we utilize an up-to-date version of the genome database (8,631 quality-controlled genomes of 3,302 species; as of March 2018).